Home
Academic
What is the most misused pronoun in American English?

A pronoun is a word such as I, he, she, you, it, we, or they that is used instead of a noun or noun phrase. That’s a general definition, but where it gets complicated is when the word they is used as a gender-biased singular pronoun, as in the example below.

“When a customer has completed an online transaction, they should print their invoice for expense tracking purposes.” Although most people will not find anything wrong with the previous sentence, according to the rule book for all writers, The Chicago Manual of Style (CMOS), using the pronoun they is incorrect. Here is the written validation from one of the CMOS editors:

Yes, you saw it at 2.98 (note 9) in the fourteenth edition, but there was some regret at having written it, and we decided to abandon the idea for the fifteenth and sixteenth editions. Though some writers are comfortable with the occasional use of they as a singular pronoun, some are not, and it is better to do the necessary work to recast a sentence or, other options having been exhausted, use he or she. For a fuller discussion of this issue, see paragraph 5.223 in CMOS 16 and the entry for “he or she” under the “Glossary of Problematic Words and Phrases” at paragraph 5.220.

According to the statements from CMOS, this is how you would rewrite the questionable sentence:

“When customers complete online transactions, they should print their invoice for expense tracking purposes.”

I will admit to occasionally making the mistake of using they instead of he or she, but I’m also aware that many problematic words and phrases can get your writing flagged and rejected depending where you are submitting it.

As in any language, but especially in American English, words and phrases exist that cause problems for students and writers. Here’s another example from the COS website of when to use they and their.

Q. I hope I’m not losing my mind. I’ve been told that “they” and “their” are used incorrectly in this sentence: “The telltale sign of a right-winger: they can’t write in English to save their lives.” I agree that it’s an awkward sentence, but is “they/their” used incorrectly? Thanks!

A. The use of they as a singular pronoun is a hot topic in online grammar forums. By traditional standards, the sentence is incorrect because it contains no plural noun for they to refer to. Traditionally, the correct versions are “The telltale sign of right-wingers: they can’t write in English to save their lives” and “The telltale sign of a right-winger: he can’t write in English to save his life.”

The growing acceptance of they as singular is in response to a need for a gender-neutral pronoun that avoids the use of he to mean he or she. Good writers would make right-winger plural to avoid the appearance of incorrectness or gender bias, but in other sentences the plural is not a good option: “Someone ate my Twinkie, and they’d better watch out!” In those contexts, many language experts now approve of the use of they. You can learn more by searching online for “singular they.”

Now, after reading these easy examples and simple rules, do you think it will be easier for you to decide when to use the correct pronoun in your writing?

When in doubt, hire one of our editors at WordsRU to edit your writing project.

Leave me a comment below if this explanation helped you understand the “singular they” challenge. 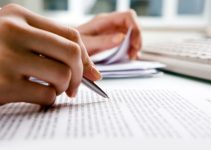